Living up to lofty corporate comparisons can be a daunting prospect when you’re known as the ‘Tesla of underground mining.’

But the team at MacLean Engineering has never been one to shy away from a challenge.

The Collingwood, Ont.-based firm—founded by engineer Don MacLean in 1973—has grown to become the largest mining equipment manufacturer in Canada, designing specialized machinery to extract precious and base metals such as gold, nickel and copper in deep underground environments. MacLean Engineering’s core Canadian operation of about 700 employees is spread across the South Georgian Bay area from Barrie to Owen Sound, while another 200-plus staffers are scattered across global branches in mining hubs such as Peru, South Africa and Australia.

Perhaps most impressive of all, MacLean Engineering plays in the same business space as multinational giants in the U.S. and Europe, such as Sandvik, Epiroc and Caterpillar—multibillion-dollar firms that dwarf it in size and scope.

“There are ocean liners around us and we’re a zodiac,” explains Stuart Lister, MacLean Engineering’s Vice-President of Marketing and Communications.

The company’s ability to not only compete, but in some cases out-perform, those much larger competitors is no fluke. Neither is its impressive bottom-line performance.

MacLean Engineering’s production levels have surged over the past five years, while headcount at the manufacturer’s head office has increased by 30 per cent in the last year alone. Much of that growth has been driven by leadership’s keen understanding of prevailing market trends and ability to adapt to changing customer demand.

“This is a place where innovation isn’t a buzzword, it’s the way we’ve survived,” Lister says.

“There’s a direct connection from the executive level to what’s happening underground. Linking what’s happening 2,000 feet underground to decisions in the boardrooms, this has historically been tough … but what Don brought to the industry was a focus on connecting the two.”

Indeed, when Don MacLean set out to build his nascent firm, he endeavoured to maintain a deep connection to goings-on underground. The since-retired CEO would regularly make subterranean trips to liaise with clients, a tradition the company maintains to this day with its global corps of technicians and product managers, who spend much of their time in the field servicing equipment or consulting on projects.

That tradition of high-touch service has paid dividends at a time when the mining industry is experiencing a seismic shift, with demand for autonomous and electric vehicles (EVs) increasing as companies look for more environmentally-friendly and safer tools to extract metals. EVs are not only emissions-free and deliver an immediate fossil fuel cost savings, but also lower costs associated with installing underground mine support infrastructure such as ventilation systems.

“Increasingly for mining companies around the world,” Lister explains, “the base case assumption is to buy a battery-powered unit unless there’s a business case why they shouldn’t, whereas it used to be about buying diesel and then looking at EVs if they made sense.”

Virtual reality vehicle monitoring, big data analysis and automation—tools used in other industries for years—have become a fixture in the mining sector and are having a profound influence on equipment requirements. MacLean Engineering has embraced these developments, leveraging its focus on design customization and its capacity to service vehicles around the world to help gain a competitive edge over those much larger rivals.

“We’re a niche of a niche,” Lister points out. “It’s very specialized. Increasingly, we’re in the EV world and the fully-autonomous world, because that’s where mining is going and where we’re going. We’re at the front of the pack.”

It turns out that Don MacLean was nothing less than an entrepreneurial pioneer when he decided to settle in Collingwood some 50 years ago. He relocated his family to the South Georgian Bay area to run the former Teledyne in Thornbury, for lifestyle reasons at a time when industries such as shipbuilding were still driving the local economy. Little did MacLean know that he’d wind up blazing a trail for other business owners to follow.

Now, the region is home to a thriving high-tech manufacturing sector in areas ranging from mining equipment to architectural glass products.

Over the years, as manufacturers began leaving Ontario for lower-cost foreign locales, MacLean refused to budge, insisting that his company would retain its South Georgian Bay roots. To protect the company’s bottom line, leadership would continue diversifying its product offerings, adding new lines such as a sidewalk snow plow manufacturing division and an environmental compaction and waste-to-energy division, to help balance risk stemming from the cyclical nature of the mining business.

Access to a pool of talented professionals—both locally and from further afield—has only propelled that success. MacLean Engineering now has employees that reverse-commute to its Collingwood offices daily from the Greater Toronto Area, all for the opportunity to work on some of its innovative projects.

“In recent years the profile of workers here has really changed,” Lister says. “We have young people fully in the digital world, whereas historically you had workers who dealt with steel, bending metal in difficult work environments. Now, we have a team of young programmers that do our vehicle monitoring systems, we have robotics people.”

The company’s focus on electrification has been critical to attracting Millennial talent, he adds, noting that many of today’s young professionals are committed to aligning work with their socially-responsible values.

He emigrated to Canada six years ago from his native Australia, settling in Toronto before making his way north to Collingwood. The allure of an active outdoor lifestyle—coupled with a senior position that allowed him to leverage his equipment engineering expertise—was too appealing to turn down.

The excitement that Marshall and his fellow young engineers share for their work is palpable across MacLean Engineering’s headquarters. Each day they tap everything from virtual reality headsets to screwdrivers and soldering irons to produce complex components that colleagues working in a nearby manufacturing facility use to build the company’s hulking vehicles.

A sense that their efforts are meaningful and make a tangible difference has helped propel employee engagement to new heights at the firm and continues to feed a culture built on creativity and innovation.

“I’m taking my strategic knowledge of the mining industry and applying it to things we’ll actually build and deploy,” Marshall explains.

“The experience I’m getting in developing new products and services for the mining industry is outstanding. The opportunities within what we’re doing here in Collingwood speaks to a very attractive option for young people that want to get in to technology, that want to build real things and add value to Canada’s economy.” 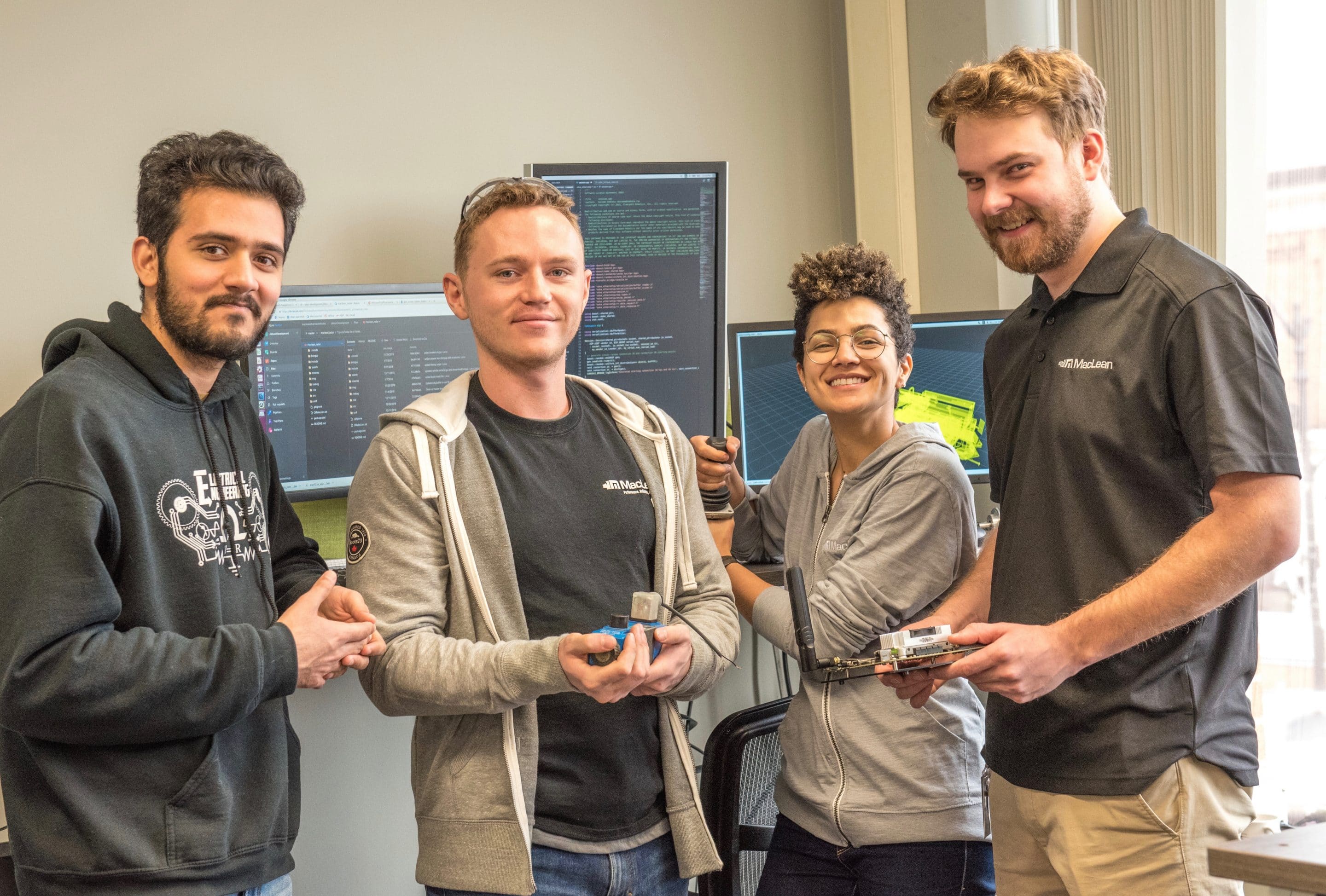