When entrepreneur and digital industry veteran Brandon Houston relocated to Collingwood in 2015, he was looking for a new professional challenge. He found it when he was hired on as a digital marketing consultant at Switch Video, makers of animated explainer videos for an impressive list of corporate clients including Microsoft, IBM and LinkedIn.

What Houston didn’t realize at that time is that he’d soon own the company.

“My third day we were told Switch was going to be going out of business—I barely had a computer,” the CEO, who previously founded and spent a decade growing a successful web development company in his native Chatham, Ont., recalls.

With the business teetering, a group of third-party investors who held a significant stake in Switch Video began looking for an exit strategy to ensure a return on their capital. No buyer came forward, until Houston decided to dive headlong into stormy entrepreneurial waters, intent on saving Switch from insolvency and closure.

“They vetted a few potential buyers that didn’t work out, so I approached the CEO of the investment company and said, ‘If I can put together a plan to cut costs, turn the company around, are you willing to look at it?’”

Despite Houston being a new hire, the investors accepted his offer, opened the books and soon commenced negotiations to sell the company. The deal closed at the end of September, 2015.

Since then, Houston and the Switch team have solidified the firm’s position as one of the most dynamic creative agencies in the Southern Georgian Bay region. Achieving profitability for the first time and expanding the customer list both at home and abroad have helped Switch build a brand rivalling that of far larger agencies in major centres such as Toronto, San Francisco and New York.

How? Houston leveraged his managerial mettle and took steps to stabilize the company’s financials, while leveraging the technical strengths of the Switch team and a robust creative process to showcase Switch’s bona fides as it targeted an expanded group of prospective corporate clients.

He also focused on transforming the culture, taking Switch from a heads-down, transactional workplace environment to one focused on collaboration, engagement and ideation. Transparency with staff and a more relaxed, familial atmosphere helped propel the company’s turnaround.

“Our most important value proposition is that we have the experience behind us to know what works and what doesn’t,” he explains.

“Many organizations will hire a smaller agency, or one or two freelancers, to create the work that we do, but realize they don’t have the internal resources to complete the project to the client’s satisfaction. We have the writers, the producers, the animators and illustration team. We have the resources to pull from a variety of voiceover professionals. We can manage the entire process for them from start to finish. Other, smaller, firms that don’t have talent on staff and have to outsource those functions.”

Perfecting Switch’s approach to product delivery and making constant refinements to the client experience have helped the company expand beyond its core technology clientele to include finance, healthcare and human resources organizations. Understanding that discerning corporate customers demand value for their marketing dollars, Switch produces all of its creative assets—from imagery to animation—from scratch. Doing so reassures image-conscious clients that Switch videos will be delivered to the exact specifications of their often voluminous brand guidelines, negating the need for costly, time-consuming revisions.

Because only a handful of Switch clients are based in or around the Southern Georgian Bay region, the firm’s project engagements are almost always managed using digital collaboration tools such as Google Hangouts, Teamwork and Slack. Not once has a client balked at working with a creative agency based in a relatively small centre such as Collingwood.

In fact, Houston sees his firm’s base as a competitive advantage—particularly when it comes to attracting, retaining and engaging the kind of highly-skilled creative talent that Switch needs to deliver world-class work.

“We couldn’t do this in downtown Toronto,” he stresses. “It would be incredibly expensive. Even the cost to live here is incredibly affordable.

“What really appeals to me are the outdoor, recreational and health aspects of being here in Collingwood compared to a major city like Toronto. I don’t ski, but if I did I could easily pop over to the hill at lunch. Alternatively, in the spring and summer time, I can leave work and throw my kayak in the bay and go for a paddle. That work-life balance is what keeps me, and the people who work for us, happy.”

Lower operational costs and greater flexibility also make it easier for local companies to take risks and innovate, according to Houston. That explains why the CEO and his team are embracing leading-edge technology and seeking ways to incorporate it into their creative products to help Switch clients showcase their own brands in ever more effective ways.

Developing proprietary digital tools and services are very much in Houston’s near-term strategic vision for the firm.

For entrepreneurs considering starting or locating a business in Collingwood, but who might be hesitant to leave a major urban centre, he offers this advice:

“Come and spend some time here. Whether you have a connection to Collingwood or not, once you get here, and it doesn’t matter what season of the year, you’ll fall in love with the town like I did.” 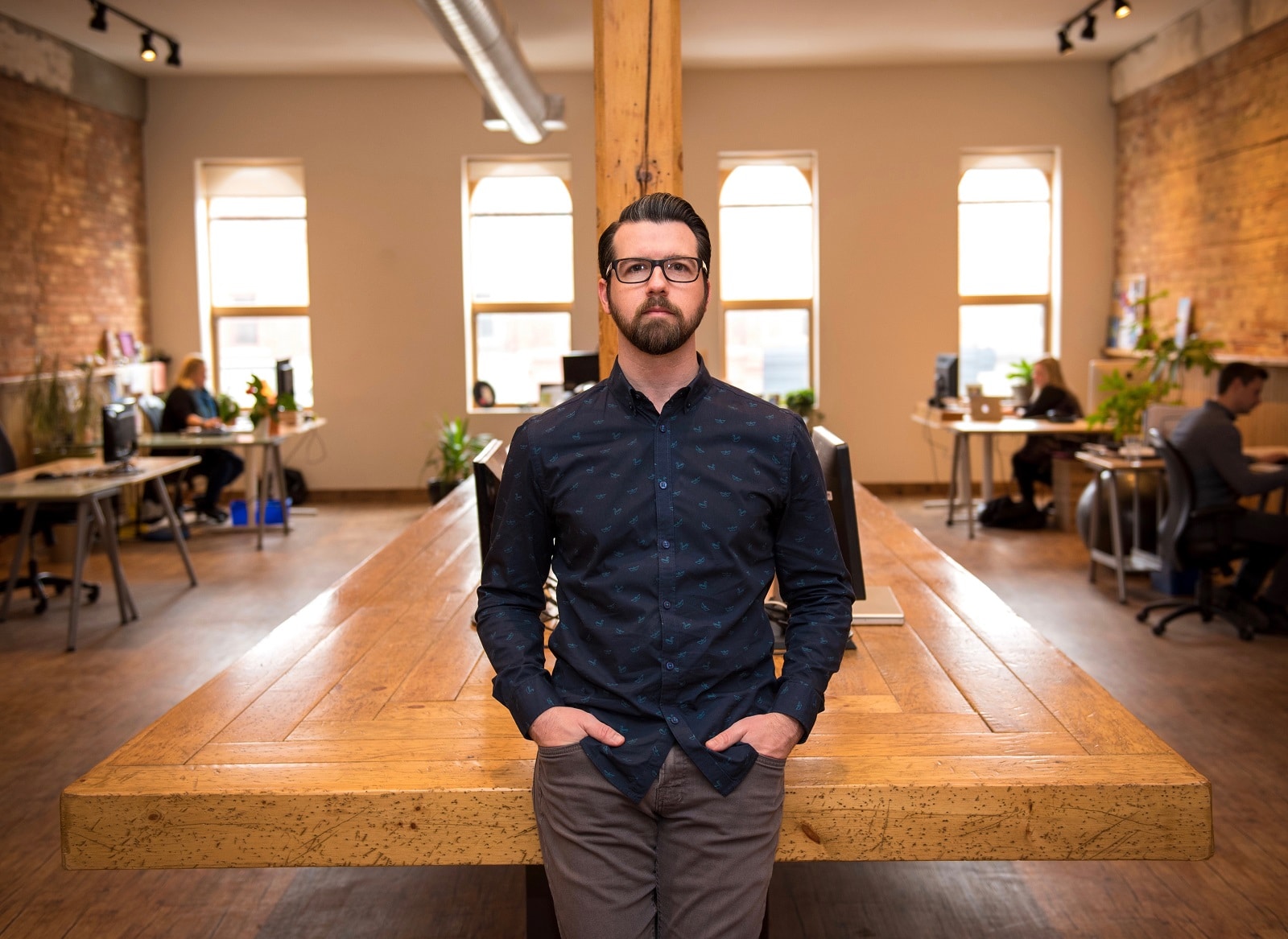